*Opponents sued to disqualify the election results and won. See Boucher v. Bomhoff, 495 P.24 77 (1972). Key excerpts copied below. See the separate web page discussing that case and how convention opponents have used it.

Note: Despite the header “Ballot Measure #1,”  local ballot measures come before this ballot measure in the layout of the ballots.

** There were no committee transcripts. Committees also often failed to provide reasons for their proposals. Committee of the Whole transcripts were not created until the latter part of the convention.

Lowest number of votes for a candidate to win: 49*

# A key distinction is incumbent delegates who are 1) retiring when after being elected a convention delegate, or 2) seeking re-election. The former don’t present a conflict of interet (a violation of the ban on plural office holding), just as legislators are allowed to serve in the executive branch after leaving the legislative branch.  Unfortunately, Alaska’s readily available data on incumbent legislators running for convention delegates doesn’t distinguish between these two very different incentive structures.

** The number 55 was chosen because that was the number of delegates to the U.S. constitutional convention in 1787.

*** A  federal district court ruled that incumbent legislators could not run as convention delegates based on the Alaska Organic Act passed by Congress. Plural office holding is generally either unconstitutional or frowned upon in a constitutional system based on checks & balances. The incumbents objected and Congress changed the law to enable them to run.

***** The delegate opposed to the proposed constitution resigned just before the final vote.

****** Some local districts were multi-member districts.

Unfortunately, YouTube requires the viewer to watch an ad before being able to view the documentary.

University of Alaska Summary: The 49th Star was created to recognize the 50th anniversary of Alaska’s constitutional convention. The hour-long film chronicles the road to statehood and the constitutional convention and includes interviews with convention participants, historical photographs and commentary by contemporary historians. The documentary was part of the statewide Creating Alaska project, which has worked to commemorate the 50th anniversary of the creation and signing of Alaska’s constitution.

YouTube Caption: In November of 1955, a dedicated group of Alaskans gathered in Fairbanks to shape the future. The 49th Star chronicles a great story of American democracy – an account of 55 people who assembled in sub-zero temperatures to write a state constitution widely considered one of the best ever written and a pivotal achievement as Alaska continued its journey to statehood. ©KUAC 2006

Alaska Statehood Pioneers: In Their Own Words

KTOO Summary: Learn about the early days of a young state. Hear the stories of people who worked toward Alaska statehood and participated in the Alaska constitutional convention… in their own words. This ten-part series is a production of 360 North. Funding was provided by the Alaska Humanities Forum, the National Endowment for the Humanities and the Alaska Committee.

Celebration of the 50th Anniversary of Montana’s Constitutional Convention

Book Summary: In 1956, delegates gathered at the University of Alaska in Fairbanks to write a constitution for what became the forty-ninth state of the union. They produced a document that many have said was more distinctly appropriate to its time and place than any other state constitution. Victor Fischer, one of the delegates, describes this historic event.

J.H. Snider Comment: This book is generally considered one of the two most authoritative accounts of Alaska’s statehood constitutional convention. It is well written and deserves that reputation. But it also has some flaws. As is typical of this genre, it is hagiographic in tone, especially in regard to the Constitution’s framers. Consistent with that tone, it has almost nothing to say about the politics of the convention delegate races. How, for example, did the public choose 55 delegates from among 171 candidates? This is a crucial omission, partly because debates over future conventions largely center on the delegate election process. Similarly, we are told little about how much of the constitution was derived from the National Municipal League’s Model Constitution, which was also influential in Hawaii’s near simultaneous constitution making  process. John Bebout, one of the convention’s most influential consultants, was a high ranking officer in the National Municipal League. The focus is too much on Alaskans’ superhuman framers, thus contributing to the endemic Madonna-prostitute theory of constitution making, where past constitution makers are presented as giving birth via immaculate conception and prospective future ones giving birth via special interests and incumbent legislators.

Despite such a critique, it must be acknowledged that Alaska’s framers were indeed remarkably independent of such forces. They were also remarkably humble, willing to hire expert outsiders from Chicago and elsewhere and then willing to listen to them. Sure, those experts had biases, like advocacy for the National Municipal League’s Model Constitution. But their biases were transparent, as evidenced by prior publications. Normally, giving outside experts such power is disparaged, not only because the delegates are confident they know what is best but also because legislators and special interests loudly decry any influence by outsiders, which in practice seems to mean anyone else but themselves. 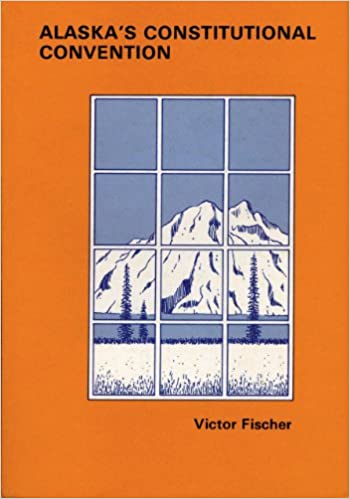 Book Summary: As late as mid-1941 the two territories of Alaska and Hawai’i were little known by most Americans. Alaska was seen as a frozen wasteland and Hawai’i, an exotic outpost in the mid-Pacific with a multi-racial, particularly Asian, population. The bombing of Pearl Harbor in late 1941 and the capture of two Aleutian Islands in 1942 made the two territories central theaters of World War II. Thousands of Americans came to know Alaska and Hawai’i as never before.

Once the war ended both territories hoped that statehood would be their reward for such loyal wartime service. Their strategic locations pointed to an increased national involvement in the Pacific and Asia. The 49th and 50th states would eventually be admitted, but it took thirteen years, from 1946 to 1959, to do it. The long delay was caused by many of the events of the Cold War. Both territories became enmeshed in the national politics of anti-communism, radical labor movements, and Arctic policy to resist a Soviet air attack across the polar North. A cadre of statehood supporters emerged to make their case to the nation, including the young Daniel Inouye of Hawai’i and Ted Stevens of Alaska, both of whom would become two of the most powerful senators in Congress.

Book Summary: This book provides a brief overview of Alaska’s constitutional history followed by an in-depth, section-by-section analysis of the entire constitution.

J.H. Snider Comment: The strength of this expensive legal reference book is its section-by-section overview, not the historical section. For a brief overview of Alaska’s 1955-6 constitutional convention, the book is fine. But for detail, it cannot compare with the two sources cited above. It does provide a brief summary of constitutional amendments subsequent to the statehood convention. But this book is a reprint of a book originally published in 1997, so even that summary is some 25 years out of date.

Book Summary: This book includes a chapter on the 1955-6 constitutional convention. 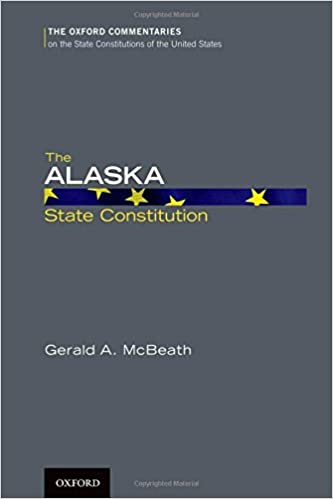 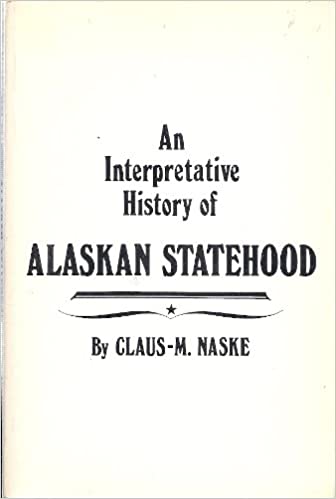 Book Summary: An Alaska Consitutional Convention? Improvements are essential to make Alaska government work. A convention can do what the legislature cannot or will not. The Right fears a Left take over; the Left fears the same from the Right. Havelock, a former Attorney General and Director of Legal Studies for the University believes: the Center will hold.

J.H. Snider Comment: The book is written by an authority on both the law and Alaska. But for a book arguing for a constitutional convention, the author knows remarkably little about the history, democratic function, and politics of this institution. The book’s lasting influence will not be scholarly. Instead, it may be practical, which was its intent. Of special political importance may be its linking of a proposed state constitutional convention with the future of the Permanent Fund Dividend, an explosive issue in the Alaska legislature where the legislature’s interest and public opinion may conflict, thus potentially creating a politically salient reason for Alaskans to call a constitutional convention. 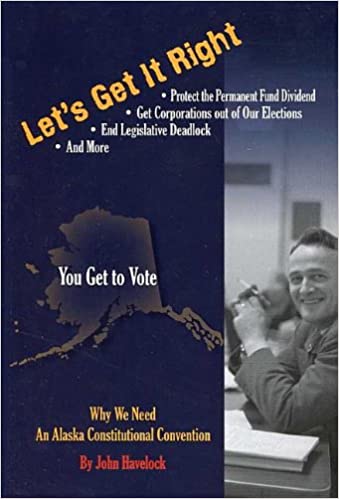